August 02, 2017
I'm going to deviate from dresses today, to talk about a piece of women's history that is close to my heart. If you went to see the new Wonder Woman movie, this story will sound very familiar: Nurtured in an all-female environment to become women of formidable skill and intellect, they chose to leave this Paradise for the Western Front of World War I, fighting not against the Germans but against the very spirit of war itself.


This is the story of a set of real-life superheroes, the Smith College Relief Unit. Just a few days ago, 29 July, marks 100 years since they set off on their quest, so I wanted to devote a post to them. All the information, quotations, and photographs of the Unit come from my own research in the Smith College Archives, where their records and letters are stored.


A bit of background about my alma mater: Smith College was founded in 1871 as a bequest by Sophia Smith, in order to provide an institution where women could gain a university education equal to that available to men at the Ivy League schools, which at the time did not admit women. It was among a number of women's colleges started in the late 19th century, in both the US and Britain, amid concerns that fragile female brains just couldn't handle higher education, or that the intellectual strain would damage their reproductive capabilities.

Fortunately, Smith women and others proved the doubters wrong, and forty-odd years later, the college was known for producing such accomplished alumnae such as Harriet Boyd Hawes, an archaeologist of ancient Greek Bronze and Iron Age sites, and professor of archaeology and modern Greek at Smith. She was also involved in relief work and nursing, beginning with the Greco-Turkish war of 1897, and continuing through the First World War.

Following the United States' entry into World War I, Hawes organised a group of Smith alumnae to provide aid to the war-torn French countryside. She thought that college women were especially suited to the task due to "their steadfastness, their moderation, their good sense, their special proficiency, their ‘esprit de corps,’ to help actively in this tremendous conflict for the right." There was enormous support from the college community, and a month after her initial call, a Unit was organised, outfitted, and ready to leave for France.

There were nineteen women in total, from class years ranging from 1888-1914. Most had done previous relief or nursing work; all spoke French, and their numbers included two doctors, a wireless operator, a cobbler, a carpenter and kindergarten teacher, and a farmer. They established a base in the village of Grécourt, and opened a dispensary and store to distribute medical aid and necessary food and supplies. They had two cars and a truck shipped to them, which they used to bring the supplies around to fifteen neighboring villages. They started running games for the children immediately after their arrival, and soon set up schools, with the French government supplying teachers. On September 21, St. Matthew’s Day (patron saint of Grécourt), the Unit found a priest to hold the first church service the village had had in three years.


The region had only recently been under German occupation, and was still not far behind the front lines. They were within earshot of artillery and saw aerial battles overhead. Catherine Baker Hooper described the conditions in a letter home to her family in September:


"...any number of trenches, barbed-wire by the acre, dug-outs, abris [shelters], sand-bags, lookouts up in trees, & three enormous shell-holes in the road… We saw almost miles I should say of graves- German, French, and English, and every once in a while would pass a whole cemetery of little wooden crosses. But the worst thing of all to me was the villages we went through, especially after seeing lovely Southern France and knowing what it all must have been like before ‘La Guerre’… I wish I could make you see it all- the heavenly blue blue sky and the clear air and the awful wrecks of habitation- it gives you a terrible feeling…"

The Unit undertook their work with gusto, and despite the rough living conditions and threat of war just over the horizon, they seem to have enjoyed the adventure. "The unit is loads of fun & it is more like being in college than anything I’ve done since- living a lot of us together in a bunch. I am crazy about a lot of the girls," Hooper wrote. She treated the difficulties of their work with humour:


"I’ve been having a horrid time with one of my fingers which I mashed quite badly with a pickaxe trying to open a crate & which got infected- it’s been open for a week now and seems to be showing no signs of healing, so in case my next letter tells you it has been amputated don’t be surprised! I only hope I’ll get a Croix de Guerre if it has to come off!"

They spent a good deal of time entertaining the neighboring soldiers, but as Hannah Andrews (one of the Directors of the Unit) wrote to the War Services Board, "The girls call Colonel Rogers ‘the undertaker’ because he will be the one to put us out if we are put out. They groaned when I asked him to dinner- but I find that this and all our many invitations more than pays the Unit." Being in the good graces of the military authorities doubtless made conducting their relief work much easier, and they also received material help and supplies such as gas masks.


In March, 1918 the German Ludendorff advance forced the Unit to evacuate, working tirelessly to get the civilians to safety. They ended up caring for refugees and serving as nurses behind the lines of some of the most brutal battles of the war, Chateau-Thierry and Verdun. Andrews reported to the War Service Board, "The girls had to choose in leaving Grécourt between saving their personal belongings and people," so they were left with practically nothing. "The girls are still very tired, although nothing of course irritates them so much as hinting that anyone of them cannot work 24 hours a day without rest." Apparently Smithies haven't changed much over the last 100 years.

After the war, the Unit returned to Grécourt to help rebuild, and remained there until 1920. The French government gave them the Silver Medal of the Reconnaissance Française for “spiritual and great material help to the inhabitants of the department of the Somme.” The Smith College Board of Trustees commissioned the Grécourt Gates, a replica of those of Chateau Grécourt, and these still stand outside College Hall, as a memorial to the work of the Unit.


The vast horrors of World War I must have seemed overwhelming, but these nineteen women made a huge difference to the lives of the civilians living in this corner of France. As surely as Wonder Woman charging her way across No Man's Land, they persisted against harsh conditions and shortages of goods, deflecting obstacles and rallying the college's resources behind them. They responded to the humanitarian crisis that the war caused, stepping up to help those most in need.

I'm currently reading Jill Lepore's fascinating book, The Secret History of Wonder Woman, which compellingly places the comic book superhero of the 1940s as a product of early 20th century feminism and progressive politics, specifically the women's suffrage and birth control movements (as summarised in a New York Times article here). The Smith College Relief Unit (Amazons, in their own way, under the leadership of ancient Greek scholar Hawes) was likewise the product of women's education and emancipation. It was no coincidence that Gloria Steinem (Smith class of 1956) chose Wonder Woman for the first cover of Ms. magazine.

As this review of Wonder Woman points out, Diana's real superpower is just being herself, with her unique origins. She is empowered to walk into a room full of men debating the progress of the war, because it doesn't even occur to her that she would be unwelcome there. In the same way, women's colleges are still valuable today, for providing a place where women (and now, increasingly, transgender and gender nonconforming students) are the ones to be elected to student government, to speak up in class, and to support and challenge each other. Sadly, we're not trained to be Amazon warriors, but the confidence in one's own ideas and courage to speak up are just as valuable in the modern world.

What are the best ways of telling these lesser-known stories of women's history, and making them relevant to the present day? Do any other historically-minded Smithies want to help me put together a Smith College Relief Unit impression? 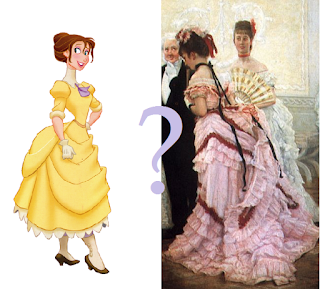 These were the two references I repeatedly got at the ball, so I'm really curious what everyone thinks my gown reminds them of! The Tissot homage with the ribbon necklace was deliberate, but I've never even seen Tarzan, so that was completely unplanned! Not a single person mentioned Hufflepuff, so clearly I need to concoct a large badger headdress to wear with it next time. 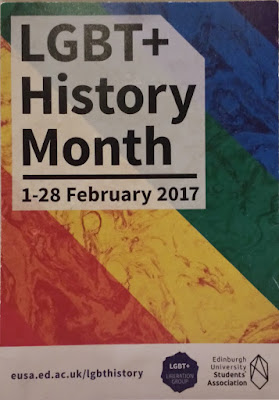 February is LGBT history month in the UK, and I've been wanting to write a post on this topic since this time last year. It failed to happen through a combination of real life being slightly distracting, and my feeling overwhelmed by the scale of the subject. As it is now, incredibly, an entire year later, I will simply offer some thoughts on presenting LGBT history in a museum context, why it's difficult, and why it matters.


The very concept of LGBT history is fraught, because the terms gay, lesbian, bisexual, and transgender only appeared around the end of the 19th century or even later, along with modern concepts of sexual identity. (This article is a really good summary of how concepts of homo- and hetero-sexuality came about at this time). Of course, there have been people experiencing and acting on same-sex attraction and crossing gender lines throughout history, but those stories can be hard to uncover, and hard to tell without imposing modern identity ca…