These were the two references I repeatedly got at the ball, so I'm really curious what everyone thinks my gown reminds them of! The Tissot homage with the ribbon necklace was deliberate, but I've never even seen Tarzan, so that was completely unplanned! Not a single person mentioned Hufflepuff, so clearly I need to concoct a large badger headdress to wear with it next time.


This is it! I'm really pleased with how it turned out, and it's very close to what I originally envisioned. Here are my main inspirations: the left-hand gown in this fashion plate, and the original of the c. 1871 dress in Patterns of Fashion (there were a lot of iterations of this pattern at the ball- I wish we could have all gotten a picture together!)


The gown made its debut at the Prior Attire Victorian Ball in Bath last weekend. This was the second year in a row that Peryn and I have gone, and it was even more enjoyable with some familiar faces this time around. True to tradition, I was sewing up until the day of the ball, but by that point it was just finishing touches rather than major construction, which is much more relaxing!


I have another post written about the under layers, so for now I'll focus on the gown itself. I followed Janet Arnold's pattern pretty faithfully, only leaving off the ruffle on the overskirt due to time and fabric constraints. It consists of a trained underskirt, a bustled overskirt, bodice (the original has both day and evening versions), and basque (the little extra peplum bit- see picture above). Most of the pieces I was able to cut using the original measurements. I just had to make the bodice a bit bigger as it was ridiculously short-waisted, even on me. I am absolutely rubbish at taking in-progress photos, which is too bad as it would have been amusing to document all the places I ended up working on bits of this project!

So, two things I thought worked really well, and one that didn't... Throughout construction I was concerned about the skirt being the right shape, since I didn't have a proper 1870s bustle. I flatlined the underskirt, but in far lighter-weight fabric than would have been ideal. The train was sad and flat.


I faced the hem with a strip of stiffer fabric, and bound the edge in cotton tape, which helped it hold its shape a bit better. Adding the ruffle to the hem also helped- definitely worth the approximately ten thousand hours of my life I spent hemming it.


I decided what I really needed was the period solution- a dust ruffle, or balayeuse. (This blog gives a good overview of what that is and how to make one.) I looked for pre-made eyelet ruffle to use as a quick and easy option, since I was running out of time, but it was more expensive than I could justify for something that was going to get dragged around the floor all evening. Then I remembered that I had some black organdy: stiff, lightweight, wouldn't fray, wouldn't show dirt, and would go perfectly with the black trim!

The day before leaving for the ball, I cut a piece of cotton to the shape of the train (black might have been better than white, but oh well), cut the organdy into 4" wide strips, and just freehand pleated them on. I also pleated a strip onto twill tape to go around the front section of the hem. I was able to use the selvedge for most of the bottom edge, but it's also tightly-woven enough that fraying hasn't been an issue.

I basted it in, and the train now has a wonderful amount of body and rustle. I sewed a ribbon loop under the outside ruffle so I could lift it up for dancing, and I love how the black ruffle peeks out. I was concerned about dancing in a train, but it stayed out of the way extremely well, and I didn't trip once!


The other thing I was really pleased with was the berthe, or neckline trim. I had found pretty lace, but I had to shape it to the berthe I'd cut from fabric. I ended up folding it so that the top border showed all the way along the top, tapering the rest to fit the shape. At the centre front and back, I carefully trimmed the lace to overlap seamlessly. It was tricky because the large motifs are actually teardrop shapes, but I got them to form a circle where they met, and I think it worked pretty well!

The problem area is the centre front at the waist. I basted the bodice to the overskirt waist so I wouldn't have to worry about adding hooks and eyes to hold them together, and this ended up creating a weird gap in the bodice fastening. I expect that will be easily fixed if I go back and take the time to do it properly (and is that not so often the case?) The basque waistband also ended up being too big and weirdly angled, so the front points want to overlap rather than lying nicely side-by-side. So I need to take that apart and fuss with it a bit more too. The little rosette in front is currently hiding a multitude of sins!


This beautiful piece of art is your reward for making it this far! I'm planning a couple more posts on all the supporting undergarments, and on the hairstyles I created for Peryn and myself. And please vote in the comments... is this dress Tissot, or Tarzan? 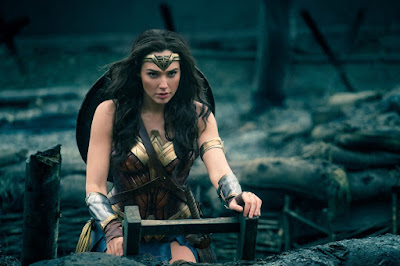 I'm going to deviate from dresses today, to talk about a piece of women's history that is close to my heart. If you went to see the new Wonder Woman movie, this story will sound very familiar: Nurtured in an all-female environment to become women of formidable skill and intellect, they chose to leave this Paradise for the Western Front of World War I, fighting not against the Germans but against the very spirit of war itself. Wonder Woman in the trenches This is the story of a set of real-life superheroes, the Smith College Relief Unit. Just a few days ago, 29 July, marks 100 years since they set off on their quest, so I wanted to devote a post to them. All the information, quotations, and photographs of the Unit come from my own research in the Smith College Archives, where their records and letters are stored. Paradise Pond, Smith College A bit of background about my alma mater: Smith College was founded in 1871 as a bequest by Sophia Smith, in order to provide 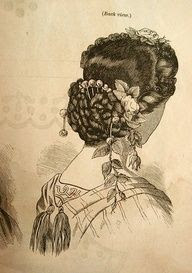 When you're recreating historical fashions, it's important to keep your head in the game. By which I mean, of course, a period-appropriate hairstyle is an essential part of creating an authentic look. I'm always trying to improve my skills, and one of the benefits of going to the Bath Victorian Ball with Peryn was having someone else's hair to play with (and, you know, getting to hang out with an excellent history friend). There's so much more you can do when you're not trying to work behind your own head! Here are details on how I styled our hair for the weekend, along with some tips for anyone who wants to try something similar. Apologies for the dearth of in-progress pictures; I realise that images are much more helpful than written descriptions, and I've tried to make up for this at the end of the post. But also, please do ask questions! It's good to be familiar with your hair texture and how it behaves. Peryn's hair is waist length, fine, an